Phrases like “housing vouchers” and “senior accessibility” aren’t commonly heard at a weekend hackfest. But those words were the focus of one of Seattle’s largest open data hackathons ever — a unique event hosted by Zillow and the University of Washington this weekend. 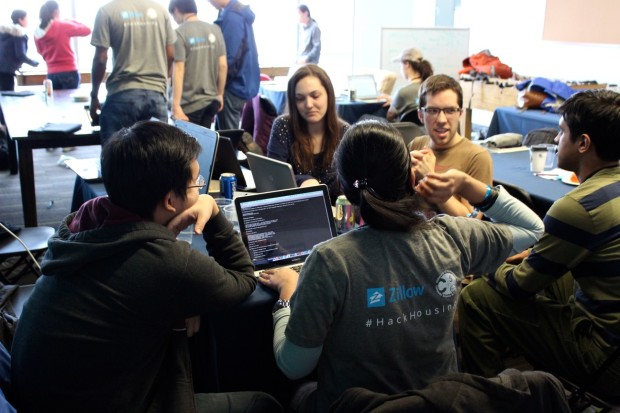 More than 200 developers spent most of the past 72 hours at Zillow’s downtown Seattle headquarters for “,” an event that encouraged teams to use to build solutions that help people find affordable and accessible places to live — specifically first-time homebuyers, senior citizens, and low-income renters.

The judges awarded the $10,000 first-place prize to SmartMove, an app developed by Tim Lebell, Jake Grajewski, and David Puerto that determines the best place to live based on proximity to a person’s most-visited locations, like a workplace, the grocery store, and other places critical to their daily lives.

The weekend started with a featuring Zillow co-founder Rich Barton and former U.S. Deputy CTO Nick Sinai, who both spoke about the importance of open government data. Barton noted how the idea for Zillow’s  tool, which estimates the value of every home in the country, came about because of open data.

“ was able to write that algorithm because we had access to public data — what people paid for a home and the tax assessment of that home was deemed to be public information,” Barton said.

After hours and hours of brainstorming, coding, and caffeine, the event ended Sunday afternoon with 30 teams each giving 3-minute pitches to a panel of judges that included Zillow CTO David Beitel, UW Computer Science & Engineering professor Ed Lazowska, and the City of Seattle’s Deputy Mayor of External Affairs, Hyeok Kim. 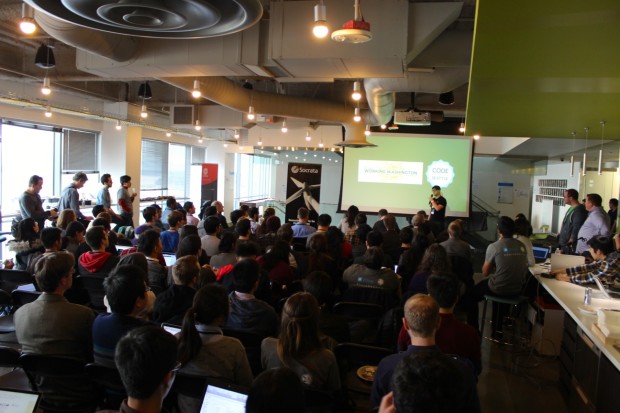 The teams used an array of publicly-available datasets, were compiled by the (HUD) specifically for the hackathon — in areas such as federal housing programs, apartment buildings with accessory dwelling units, and transit information. Zillow also provided data on home values and rents, while Seattle-based open data startup  offered technical support and resources throughout the weekend.

Ideas ranged from a social network that helps people find accommodating roommates, to software that calculates the return on investment for landlords interested in offering space to low-income renters, to a tool that lets senior citizens filter available housing based on specific accessibility requirements like ramped entryways, wide doorways, or supportive bars in the bathroom, for example. 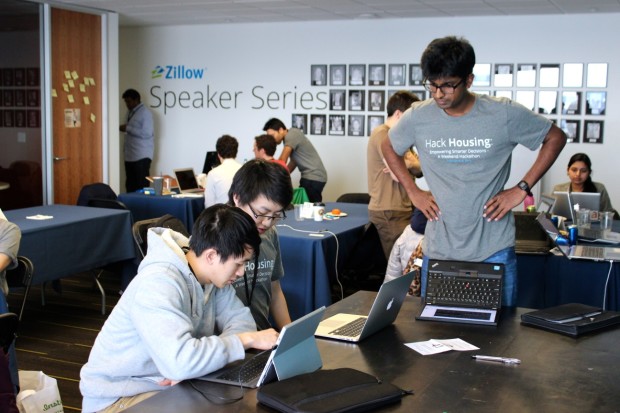 Rob Renner, a social science analyst with HUD, had never attended a hackathon prior this one. He saw creative solutions that “I would have never imagined before.”

“Even if nothing is ready to go to market right away, just actually seeing the way folks who are used to building innovative tools look at your data and look at your problem and completely turn it on its head — there’s value just in that alone,” Renner said.

“At the time, I didn’t know what I was doing,” Puerto said. “As I’ve grown, I found that living in the middle of everything cuts down on travel and living expenses. I can actually spend more time doing what I want to do and not traveling back and forth between places. Finding a place that has everything I want is where I want to live.”

Lisa Wolters, director of housing advocacy at , also said it was the first time her organization had participated in a hackathon. Like many others, she was impressed with the innovations that were created in just a few days.

“What was done today could literally change people’s lives,” Wolters said after the event. “When people can find housing, they can go get an education, go get a job. They can get medical care. They can be a role model for their child if they want to be. It’s that stabilizing force. It can be a springboard for them to go and do other things.”

Many of the pitches included technology designed to help individual families with specific needs navigate the often-complicated process of finding low-income housing. Similar to other cities facing , Seattle is in the midst of what  with demand for homes and apartments far exceeding supply.

This past fall, Mayor Ed Murray  the Housing Affordability & Livability Advisory Committee and said the city “must act with a great sense of urgency.”

“As the fastest growing city in America, too many low and middle-income families find it increasingly difficult to live and work in Seattle,” Murray said in a statement. “It’s a complex problem, but we’ve got to address concerns about both the cost and availability of housing in our city.” 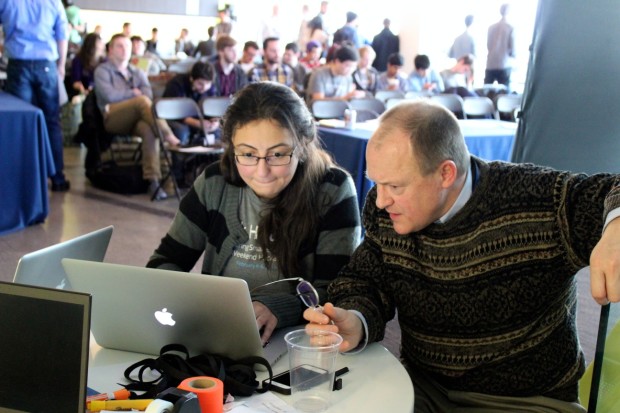 Kim, a judge on Sunday who has been Murray’s Deputy Mayor of External Affairs since December 2013, also noted that improving accessibility to housing is key to fixing .

“People are literally dying on our streets,” she said. “For a city as resource-rich as Seattle, none of us should be OK with that.”

Kim added that the public sector is “a little slower” than private companies when it comes to using new technology to solve problems, and that participating in a hackathon is one way to get the government up-to-speed.

“This is a learning opportunity for us,” she said.

Humphries, Zillow’s chief economist who created the Zestimate rating system, said that the hackathon “exceeded our hopes for what was going to happen.” He explained how a many-to-many problem exists in the housing market today, where there is a gap between people with housing questions and the programs that can provide answers.

“We can use technology to glue together these disparate programs and attach them to people who have actual concrete scenarios they need to solve,” Humphries said.

This process that Humphries described is a result of what happens when open government data, new technology, and engineers that can make the information accessible and valuable all combine together.

But perhaps the most important part of that trio is the data itself, of which the government often controls. During Barton’s talk on Friday, the Zillow chairman described how the practice of  — in which banks would identify bad neighborhoods where they didn’t want to make loans — helped lead to the creation of public data sets we see today.

“This [redlining] happened frequently enough that we as a society rose up and said, ‘This is not fair,’ ” Barton said. “We were going to open all of this information up because when we shine sunshine into dark corners, all the nasties crawl out. All the mold dries up because we the people can see the data. It was really that opening up of government data that gave us the idea for Zillow.”

Perhaps the next Zillow was among the 30 teams that pitched ideas on Sunday, leveraging government data. Lazowska, the Bill & Melinda Gates Chair in Computer Science & Engineering at the UW, said afterward that he was proud of all the teams that worked through the weekend and used technology to come up with real solutions to real problems.

“Data science can be a huge force for social good,” Lazowska said.

Here’s more about the second and third place finishers, and a video recap of the event is below: 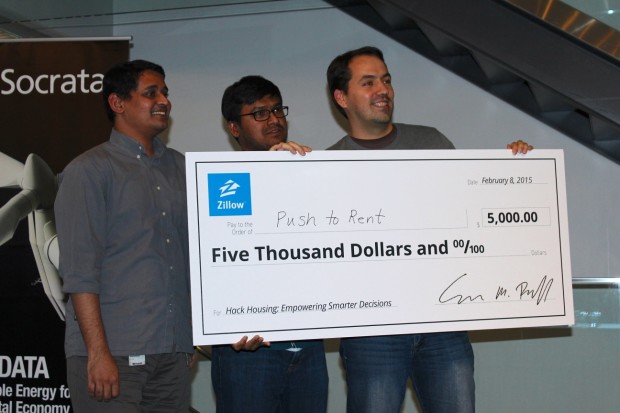 The Push to Rent team developed software that literally allows people to “push to rent.” Its website lets users upload rental application information once and easily use the data again for future listings. For those that may not have a smartphone or Internet access, the app has a text message feature that gives people a way to apply via text messaging. “We want anyone to look at this and be able to use it,” the team said. 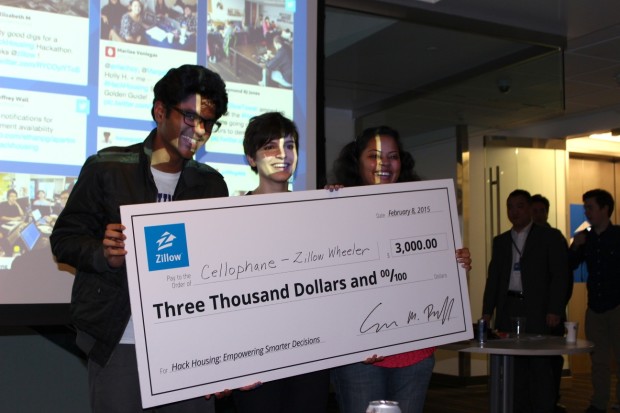 Team Cellophane came up with “Zillow Wheeler,” which provides a better way for those with disabilities to search for accessible housing. Instead of one checkbox for “accessible” that many sites feature today, the team’s app would include filters for specific housing options like roll-in showers or kitchens with adequate counter heights.

Tax Benefits That Can Help Small Tech and Entrepreneurs Now

Tax Benefits That Can Help Small Tech and Entrepreneurs Now

Amazon has canceled its Lord of the Rings MMO game