This is very different, and pretty cool.

That thought hit me while reading the pages of an e-book across two screens; taking notes on a Spanish lesson on one screen with a language app open on the other; watching a YouTube piano tutorial with the digital sheet music beneath it; and reading an email on one screen while still scrolling through my inbox.

Those have become some of my favorite ways to use Microsoft’s Surface Duo in the month since its release. Rather than putting the Duo through its paces solely to write a review, my goal was to understand how this dual-screen device fits into the world of computing by actually fitting it into my life.

Spoiler alert: It’s not a perfect fit. At least, not at this moment in time, with many of us stuck at home, not traveling or commuting, and served perfectly well by our existing combination of PCs, smartphones and tablets. And not at its current price. Starting at $1,400 for the cheapest model, Surface Duo costs more than a premium smartphone, or as much as a good computer.

But it’s a very promising device. It’s a beautiful piece of hardware, and a novel take on mobile computing. It works perfectly well as a phone, especially when paired with wireless earbuds.

There are some user-interface quirks. There aren’t enough third-party apps optimized to take advantage of the dual screens on their own. And compared with a typical smartphone, there are some basic features missing or not up to current standards.

But those sweet moments of dual-screen symbiosis, enhanced by the ability to pair and launch apps simultaneously, have convinced me that Microsoft is on an interesting path with the Duo. I hope it keeps going. It’s an outdated cliché to say that Microsoft tends to perfect a new product in the third version, but I think it’s a possibility here.

Journey to the Duo: Nitty-gritty product reviews aren’t my everyday job, but I like to try new devices related to our news coverage. I did this with eight years ago, convincing my family to get the new Microsoft tablet instead of an iPad.

So did Microsoft’s Surface business, recovering from its to become a mainstay of the PC industry. Surface sales as PCs experience ; PC shipments rose 13% in Q3 . The Surface product line has expanded into , as exemplified most radically by the Surface Duo.

It’s not the only dual-screen device out there, but it’s a unique one. Rather than a foldable screen, the Duo has two 5.6-inch touch screens on a 360-degree hinge, in a clamshell design. In short, the Duo is an interesting attempt by Microsoft to create a new category of computing. 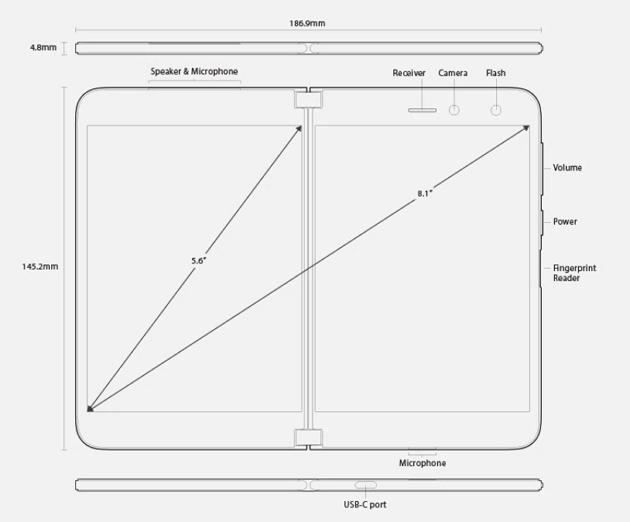 So I pre-ordered one, banking on Microsoft’s liberal 60-day return policy if it isn’t a match. I went all-in, switching the SIM card to the Duo and leaving my Galaxy Note 10+ on my desk as I walked around the house and ran errands.

I’ll be speaking with Microsoft’s chief product officer, Panos Panay, , and while we’ll discuss a range of topics, the Surface Duo will no doubt be one. So I wanted to get the key points from my experience down in writing in advance. Here are my takeaways.

Microsoft + Google: Surface Duo is Microsoft’s first Android device, the result of . It’s a collaboration that would have been almost unthinkable a few years ago. It’s a big deal to see these companies working together.

But as realized on the Duo, the combination of Google and Microsoft can feel at times like a split personality. It starts with the initial bootup process, which has you log in separately to your Microsoft and Google accounts.

Most of Google’s key apps haven’t yet been optimized for the Duo’s dual screens. For example, while Microsoft Outlook neatly divides itself into inbox and message body on the two screens, Google’s Gmail doesn’t yet have that capability.

Hardware: This is a sleek, high-quality device. The hinge is perfect: smooth and stable. With the clamshell closed, the Surface Duo’s footprint is roughly equivalent to a small paperback book, too big to fit comfortably in most front pockets, but otherwise easy to carry. 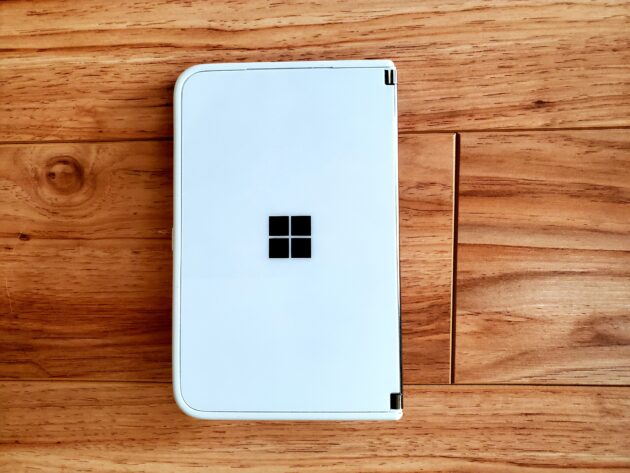 I appreciate the subtle details, like the USB-C port, and the fingerprint reader in the edge of the device. It’s durable, already surviving one topple off the table, no doubt with the help of the attachable bumpers that come with the device. (Some with hardware discoloration and cracking around the USB-C port; I haven’t run into those issue on my device.)

The Surface Slim Pen, sold separately, is great for taking notes and drawing, much smoother than the S-pen stylus in my Note 10 Plus, in my opinion.

On the downside, there’s no support for NFC for mobile payments, as I discovered with a line behind me at the convenience store. And as early reviews indicated, the bezels take up a lot of real estate.

The 11 MP camera may disappoint people who’ve been spoiled by high-end smartphones, but in my experience, it’s not as bad as early reviews might have suggested. Here’s a comparison of the the same scene as photographed in the Galaxy Note 10 Plus, top and Surface Duo, bottom, unaltered. The color is much richer on the Galaxy camera, and the difference in resolution is apparent when you zoom in.

Usability: Maybe it’s just me, but I struggled at times to maneuver the Duo in my hands. I wonder if this will change as I use the device and grow more accustomed to it. The ability to crack the Duo open slightly to see the date and time is a nice feature, and it can be used as a single screen device by folding it fully open, but I found going back to the simplicity of a single-pane smartphone a relief after using the Duo for a while.

Quirks in the interface can also make the device disorienting. My pet peeve comes when you close an app, and the home screen taskbar suddenly jumps from its position at the bottom of one screen to instead span both screens, moving the icons just as I’m going to press one.

This is what I’m referring to. , anyone else know how to stop that taskbar from jumping around?

If this were Windows, I wonder if Microsoft could have figured out a better solution for whatever user-interface challenge this feature is trying to solve. We’ll have to wait to see what happens to the Surface Neo, the larger dual-screen device based on a new version of Windows, which has been delayed until next year, at last report.

While many Microsoft apps are nicely tuned for the experience, there are some Windows apps and experiences that are mainstays for me on the desktop that I would love to have on this device, namely Microsoft Paint and Paint 3D … yes, seriously.

In an ideal world, it would be great able to use on Paint on Surface Duo in the same way that I would use it on a Surface Book, syncing everything seamlessly across OneDrive from the Duo to my other devices.

Yes, there is a OneDrive app on the Surface Duo, and I can go in there and find my files, but I was reminded of the difference between an app and integration at the operating system level when I booted up a new Surface notebook computer recently. After signing in to my Microsoft account, I saw my desktop immediately replicated on the desktop of that device. For better or worse, that’s not the experience with Android on the Surface Duo.

In the end, the Duo is based on the premise that there’s room between the smartphone and tablet in the technology landscape, and in our lives, for a new type of device. Based on my experience so far, I’m not convinced that space yet exists. But that doesn’t mean it won’t in the future. And in the meantime, this ambitious device is an admirable attempt by Microsoft to try something new.

Redmond 2.0: Inside Microsoft’s plan to rebuild its longtime home for a new generation

Could you beat this bipedal robot’s 5K run time?

High Capacity DNA Data Storage: Could All Your Digital Photos Be Stored As DNA?